First, introductions.  I am one of the newest members of MCV, having been invited to beef up the fife line for the Sydney Tattoo last year, and afterwards, having "drunk the punch", continued to show up and help out whenever I could.  I have been honored to be counted among the excellent musicians who comprise the fife line of MCV, and I look forward to continuing to support them and represent America whenever possible.

I speak of Ambassadorship.  Our soft-spoken, yet fearless leader, Jim MacConduibh, started us off on arrival in Malmö with the usual pep talk, reminding us that we are, and are expected to be, ambassadors of the United States.  For many whose paths we cross, we will be the first Americans they will meet.  First impressions being the most important, it was stressed to us to remember that whether we are in uniform, acting officially as members of MCV, or out of uniform, simply being ourselves, out and about town, we must remember we are representatives of our native land.  Good advice for any American traveling abroad.

That said, I was fortunate to have that opportunity during the intermission of our final performance on Sunday afternoon.  This was when our support staff (Huzzah!) was out in the public area amidst food, ice cream and beer vendors, selling our CDs and other MCV swag to any who were interested (conveniently, MCV was the last performing group before the finale in the first act, so we would be fresh in their memory).  They thought it would be a great idea to have uniformed members out at the sales table to attract attention, and to give the Swedes an opportunity to get up close and personal with the group.  For the most part, the Swedes were fairly shy about approaching us, but there was one interaction I had which I felt compelled to share via this blog.

I found myself the subject of the attention of a young boy of probably 10 years of age, along with another boy who was presumably his older brother.  We caught each other's eyes, and I smiled, not sure if the boy's English was good enough for us to actually converse.  It turns out we didn't need many words.  He was armed with a digital camera, and indicated that he would like to take my picture, so I posed for him.  He approached, and I shook his hand, and his shyness began to recede a bit.  He asked me, "Do you play for Obama?"  Touched by the sense of wonder in his voice, I had to reply sadly that no, we do not, but that we have some people who occasionally play with us who actually DO play for Obama.  I'm not sure he fully understood my answer.  He thanked me, then went back to his parents.  A few minutes later, the boys returned, and this time, our support people gave them small American flags to wave during the finale when we came out.  They were thrilled.  This time, there were more photos to be taken, and they took turns with the camera and posing with me, and I took the liberty of allowing them to wear my hat to be photographed.  I will never forget this moment:  The younger of the two took the first picture.  When I put my hat on his older brother, the boy's hand was visibly trembling as he took the picture.  The boys then traded places so the younger could have the opportunity to wear my hat.  The sense of wonder never left this boy's face.  I wish I had that picture.  After the photos were taken, the boys went on their way, but as they disappeared into the crowd, the younger boy turned back to me with a smile, and said, "We love America!" 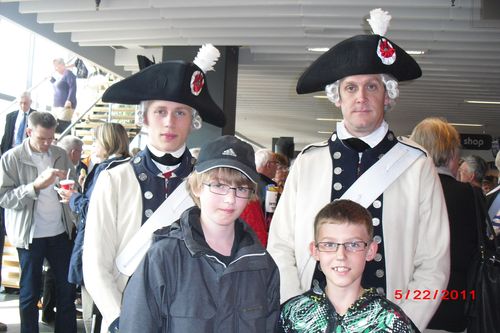