byAndrea Wirth
May 26, 2011 0 Comments 776 Views0 Likes
Share
PrevTruly an American Ambassador25 May 2011NextBreakfast in Sweden, Lunch in Denmark, Dinner in London, and Crashing in Boston!27 May 2011

Let's face it.  Tattoo shows are a lot of hard work.  Hours and hours!  We civilians sacrifice our vacation time and time with our families to do a job for which we do not get personally paid!  So, why the heck would we do this?  It's all about the opportunity to travel and see new lands, to perform for new enthusiastic audiences, and making new friends amongst the rest of the cast members. Here, I think we really found our reward!  Not only did we have returning friends there from the Malmö Fire Brigade band and the Royal Regiment of Scotland, but we made a whole bunch more new friends in the charming and talented young folks in 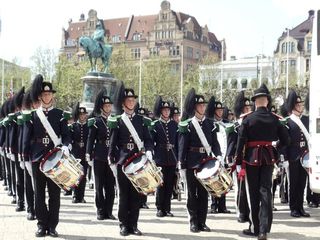 His Majesty the King's Guards Band and Drill Team from Norway. 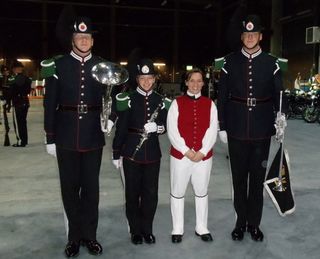 Even though their group is world famous and always spot-on in terms of performance, these young soldiers are only in the group for one year, so, as individuals, this was their first arena show!  We had a pretty lively mutual admiration society going as we watched each other warm up and rehearse.

(>The tall and the short of it.  MCV's Barbi Risken and friends from HMKG.) 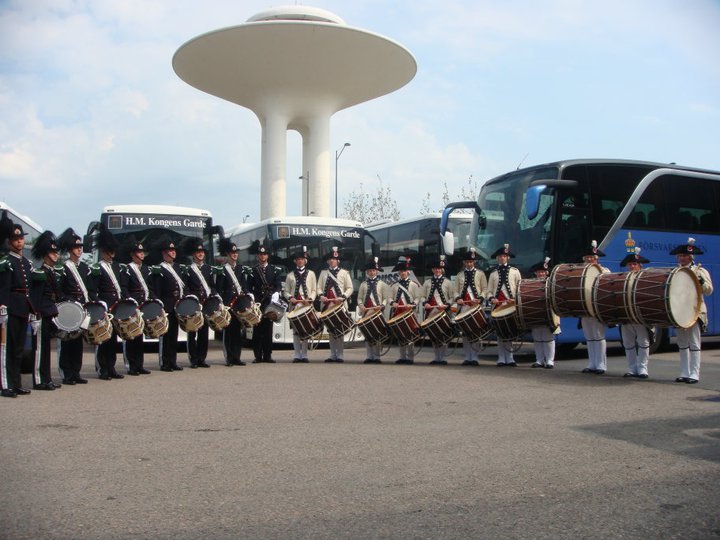 (His Majesty the King's Guards' drummers from Norway and MCV drummers pose before the last show.  Photo credit: Evan Hodges-LeClaire)

Drummers are kinda the same everywhere, I think, and drummers love to swap equipment and check out how it all works within the context of what they do.  We had lots to compare and admire with each other. 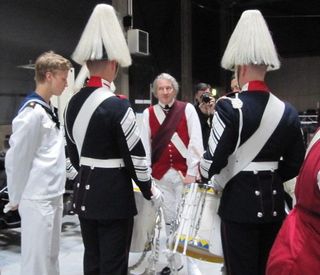 I know that many of the drummers were impressed with our clean performance.  Some even have said they found it inspiring!  What a great compliment!  It's one thing to play for the the paying audiences, but we know that the real folks in a position to fully embrace all aspects of what you accomplish are your peers.  They are the most critical audience.  We know how many hours it takes to make big long lines straight and all of the details fit exactly right.  So, when you see those qualities in others, you can't help but burst out into applause!  And there was a lot of cheering each other on the rehearsal floor and backstage.  There are those moments when you say to yourself, "Man, I know how hard that is to do and they just nailed it!"  I think it's a great energy we give each other. 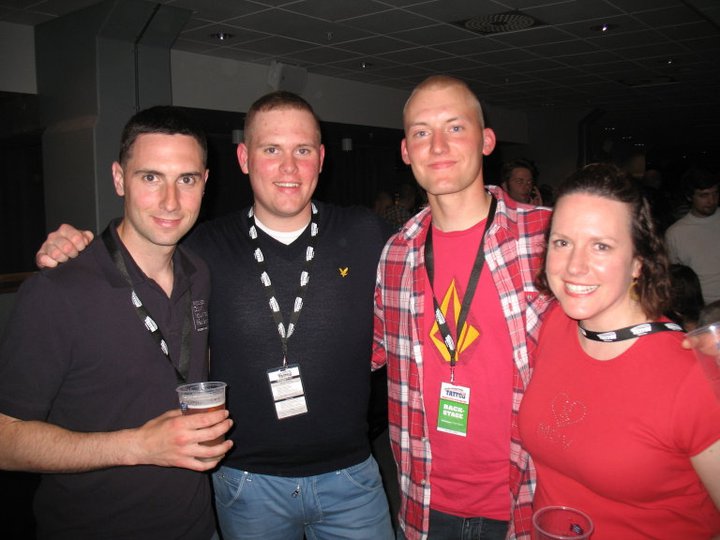 I'm very proud of all my new-found friends.  Travel experience involves adopting bits of new cultures into your own.  This new patchwork quilt of my life will have lots of Swedish, Norwegian, Danish, and Polish bits in it.  I will carry you with me where ever I go!  I hope you'll remember us as well.