MCV is going to be in Basel, Switzerland for 16 days, which is longer than this corps has ever been in a non-English speaking country, assuming you don’t count Scotland :-D.  In addition to the alumni joining

our ranks from within the USA, we have three folks who are local Baselers who will don the wig as well.

They have only limited rehearsal time with us in the USA and they must learn most everything on their own from afar.  We’ll show up on their doorstep in July and we’ll be joined together again as one team.  I suspect it will be a bit strange for them, marching in their own city while under the flag of another country.  They’ll be temporary foreigners in their own land.

The trick is that they transform into MCV members so well, that you don’t even notice that they haven’t been in rehearsal with us all of these weeks.  They just show up and make it happen.  This seems effortless, but, on the contrary, I know how much extra work these folks have to put in through self-motivation in order to assimilate with the group.  And, on top of all that, they are dealing with a different language and culture from their own, with its own politics and pitfalls.

With this in mind, I, too, made a cultural exchange with Basel earlier this year.  Through our MCV 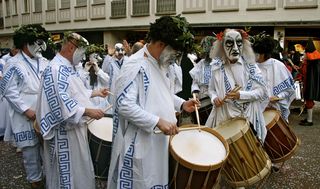 Baselers, I was invited to play with a fife and drum corps in Basel (a Clique) called Déjà Vü, for their pre-Lenten festival called Fasnacht.  This annual festival involves hundreds of Cliques with thousands of fifers, drummers, brass bands, floats, poets, all scaring away winter in a non-stop 72-hour festival.  Oh, and did I mention it’s all done in costume with masks?  It’s social commentary though street performance on a very grand scale.  When you are going to play drums in a city with about 14,000 drummers, it’s always intimidating!  This is a highly-educated audience when it comes to the rope drum!

With this new identity, I did my best to become a temporary local Basler.  I worked hard to use my

limited foreign language skills when I could as I knew it would be vital for an insider cultural experience.  I prepared on my own a completely new repertoire using equally logical but different drumming systems.  I tried to memorize a lifetime’s worth of common musical knowledge in a very short few months.  But, I had lots of help and encouragement from my Swiss friends and they were kind to give me a chance to join in the fun!  Through proper preparation, I felt successful that I had not completely embarrassed myself in my new group and might have actually made some music!

In the end I appreciated the dedication of our MCV remote members, both foreign

and domestic, much more.  I got to experience a group though a new set of eyes as a rookie, rather than a 20-year member, navigated the social scene in a foreign language, and learned valuable lessons about managing expectations from others and myself.  MCV Temporary Locals, ladies and gentlemen, my hat is off to you!  Together we will form a band and make music.  We will be, quite literally, the states united! 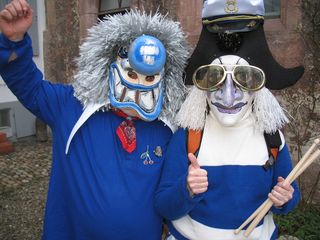 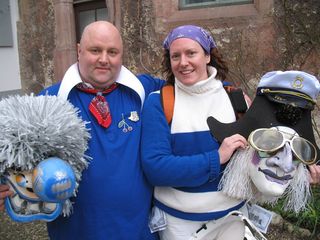