Jim & Sarah MacConduibh from MCV HQ were joined by Drum Major Tim Sutphin for a trip in early April to Halifax to attend the Tattoo's production meeting. Representatives from all performing groups were present for three days of meetings to finalize the scope and structure of this years' event.  The photo to the left shows one of the meetings between MCV and the Tattoo Production staff held in the Tattoo Office. 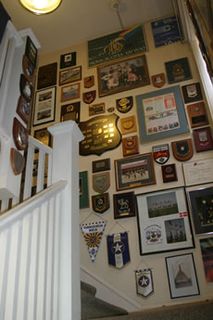 The Tattoo office itself is actually a very small house converted to business use; the photo here shows memorabilia from the past 29 annual Tattoos on the stairway to the second floor.  This year's Tattoo will boast close to 2000 performers; MCV will be performing our 6 minute Show as well as leading the massed bands in the Finale. 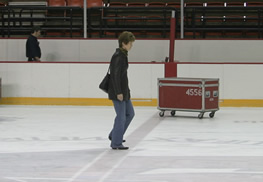 On the last full day in Halifax, Sarah was able to get into the Halifax Metro Centre and march MCV's Show,
albeit on the ice that is currently in place for hockey games!  Stay
tuned for a review of MCV's Halifax "Dress Rehearsal" at the April 19th
Lincoln Salute.