Now that I have re-entered civilian life I have had a few days to reflect on the great journey MCV just had. This was my fourth visit to Scotland but the first as a fifer. I have played the Great Highland Bagpipe for the past 20+ years and had visited in the past either to compete or to attend piping related events.   It was very odd to be performing in a country I know and love but in full Colonial attire, rather than a kilt!  But one cannot dwell on the past for long, especially with the busy schedule MCV kept in preparation for the start of the Tattoo. We were assimilated into the event, along with the rest of the 1000 member cast, in a matter of days and hit the ground running (or marching to be exact).

As Andrea referred to earlier, it was a great privilege to have such unfettered access to Edinburgh Castle; it really did feel like the Castle belonged to us and all of the performers. Once the motor coaches hit the Esplanade by 7:30 p.m. each night, it was just the cast (and the Army) that milled about inside the Castle’s walls.  The picture to the
left shows members of MCV and other units gradually getting ready for tuning sessions prior to the show. 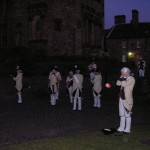 A highlight of the evening shows were our varied tune-up areas. The drummers found a spectacular viewpoint looking out over the Firth of Forth, and kept that spot for the duration of the trip. The fifers moved around a bit more, mostly due to weather considerations. The final two weeks were spent warming up in the shadow of St. Margaret’s Chapel (12th century chapel across from the Scottish National War Memorial).  The photo at left shows us wigging up just before the fireworks that mark the start of the Tattoo.

Other highlights for me were:

There are many other memories, too many for this forum, but needless to say this was an experience of a lifetime and I’m glad to have been able to participate.