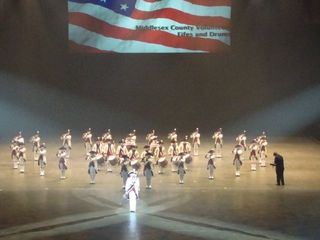 Today marks Day 2 of this year's edition of the Royal Nova Scotia International Tattoo and MCV's debut appearance at the largest indoor Tattoo in the world.  We have settled in nicely, finished up rehearsals just this past Tuesday and were well received at both the Canada Day Parade on July 1 as well as the Opening Night performance at the Metro Centre.  MCV executed it's show to warm applause and excellent post-show reviews.

Several of our performing members were featured in the Tattoo Finale. 8 fifers leading the cast of 2,000 onto the floor in Ode to Joy, drummers accompanying pipers on MacPherson's Lamen

t and Andrea Wirth as solo tympanist for the entire finale presentation.  MCV is presenting a small outdoor concert this afternoon then it is back to the Metro Centre for tonght's performance.