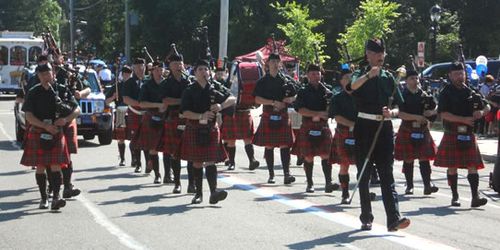 Besides MCV, there will be another group from the United States appearing at the Basel Tattoo: the Stuart Highlanders Pipe Band of Wilmington, Massachusetts.  The Stuart Highlanders are a well-known New England musical organization comprised of two competition level bagpipe bands (grades 2 and 4). This will mark their first ever miltary Tattoo and first appearance in Switzerland.   The band will perform nightly as part of the Basel Tattoo Massed Pipes & Drums.

You might ask, what does a fifer know about pipe bands? Well, I was a bagpiper for over 20 years before joining MCV.  This will be my third trip to Basel with MCV…but my first as a fifer.  In 2005 I had the good fortune of being invited to be the Lone Piper at the Yshalle Tattoo..the predecessor to the Basel Tattoo.

Several members of MCV are close friends with Matthew Phelps, the Pipe Major of the grade 4 Stuart Highlanders Pipe Band and we suggested to Matt last year that perhaps SHPB would like to consider doing something different…like a Tattoo. And the rest, as they say, is history.

The last several months have found SHPB very busy obtaining new Full Dress uniforms, learning a marching drill and memorizing the extensive music book for the Tattoo.  MCV and SHPB performed together earlier this year as part of the Stuart Highlanders annual Spring Concert. Besides the nightly Tattoo performances the Stuart Highlanders will also march in the Basel Tattoo parade and mini-Tattoo in Freiburg, Germany on 16 July and the grand Basel Tattoo parade through downtown Basel on 21 July.

All of us in MCV will be cheering on the Stuart Highlanders as they take their place in the community of international Tattoo performers.  Welcome to the club!